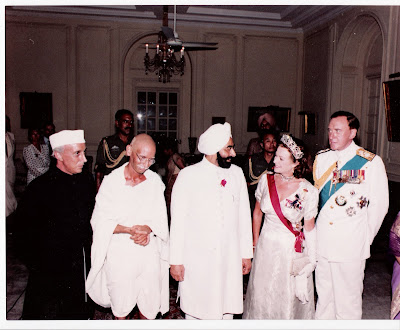 In 1986, Ian played Jawaharlal Nehru, India's first Prime Minister, in the mini-series, Mountbatten: The Last Viceroy. Producer, Judith De Paul had been searching unsuccessfully for an Indian actor to perform the role, when she stumbled across a poor quality photocopy photo of Ian (who had hoped to play Mountbatten, but wasn't tall enough). She covered the top half of the head and declared, 'we have our Nehru'.

As part of his agreement to play the role, Ian insisted on being flown to India and sitting through many hours of newsreels and steeping himself in the Indian culture. He came to love the country and its people.

The Indian Government were adamant that there should be no overt manifestations of the rumoured affair between Nehru and Edwina Mountbatten (played by Janet Suzman). However, the actors were able to engender a palpable electricity between the two characters.

For those of us who have watched the drama, the final scene, in which Nehru bids farewell to Edwina, shall remain unforgettable.

There are contributions from Sam Dastor and Janet Suzman in We Could Possibly Comment: Ian Richardson Remembered , as well as some of Ian's own recollections of the making of the drama.

The DVD is still available from a few sources, such as Amazon UK, Acorn Media and Ciao.Co.UK and scenes from the Drama have just recently been put onto YouTube.
Posted by SharonM at 14:57