In response to the Youtube tribute to Ian I highlighted in my last post, I recieved this message from Stacy Keach, who was one of the contributors to We Could Possibly Comment - Ian Richardson Remembered :

Having enjoyed the honor and privilege of working with Ian on Mistral’s Daughter some years ago, I was particularly moved by this video, seeing the great man toward the end of his extraordinary life and career, in all his elegance and charm, his wickedly divine sense of humor, and his restless creative energy. He was the epitome of elegance, forever the perfect gentleman, even when long days of shooting were accompanied by their inevitable emotional toll. Ian was always in the midst of exploring the various behavioral choices challenging his furtive imagination, always eager to discover another, better way of expressing a moment. He was a consummate artist. So many of his wonderful performances are etched in my memory and in my heart. He was a great inspiration to me, and he was truly a great actor.
Thank you for sharing this wonderful tribute with all of us.
Stacy Keach
Mistral's Daughter is well worth watching.
Posted by SharonM at 01:44 4 comments:

'Japlick', who was part of the Murder Rooms series, filmed in 2001, has put this footage of Ian on the set onto Youtube as a lovely tribute to him.

It brings back so many memories to me of spending time on the set of the original Murder Rooms story, filmed in Glasgow. It was a different actor, Robin Laing, playing Conan Doyle and the director was Paul Seed (who directed Ian in House of Cards, To Play the King and Booze Cruise II & III). Paul Marcus, who directed two of the four Murder Rooms stories in the series, The Photographer's Chair and The White Knight's Stratagem and also directed Ian in Imperium: Nero is the director in the footage. 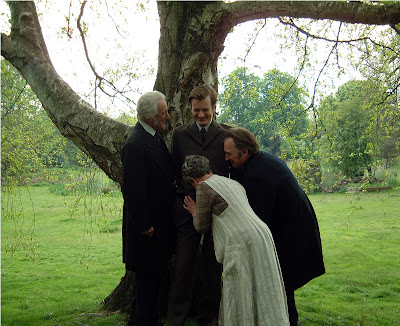 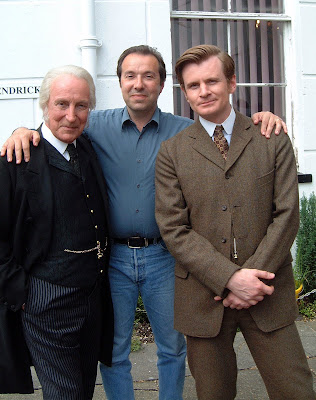 The atmosphere in Glasgow was just as lovely as it was in the series.

The singer 'Japlick' used (after asking me for a suggestion) for the footage is Charles Trenet, a favourite of Ian's and by a coincidence, probably not known to him when he chose one of Trenet's songs, was used in what, from memory was the last movie Ian worked on (though it was released before Becoming Jane), Desaccord Parfait.
Posted by SharonM at 16:14 4 comments:

Guardian Top 50 Dramas of all time 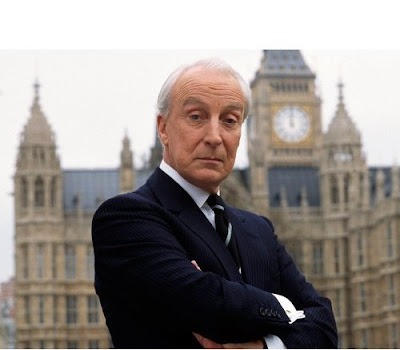 Three of the programmes Ian was featured in have been included in The Guardian's Top 50 Television Dramas of All Time - which includes both UK and American dramas. Top spot has been given to The Sopranos - since I've never seen it, I couldn't possibly comment on it.
Not surprisingly the highest placed of the programmes Ian was in is, at No 18, House of Cards, which has consistently remained a high seller on Amazon UK. Of course, without question I would have made it No 1. 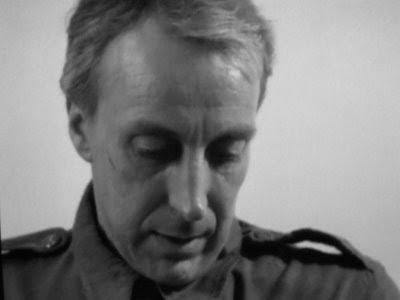 At No 21 is Tinker Tailor Soldier Spy - Smiley's People is at No 17 and I wonder if these two are in the correct order.

Sneaking in at No 46 is Bleak House. A wonderful production and cast, but I remember filming it was rather uncomfortable for Ian at times because he had to sit for hours at a time without a break and he hated the wig he had to wear.
There are certainly some surprise omissions, like Edge of Darkness, I Claudius, the earlier Forsyte Saga with Eric Porter and Fortunes of War being just a few that spring to mind.
Do I think that more of the programmes Ian was featured in should be included? It's all a matter of personal taste, but I would have placed Private Schulz, Porterhouse Blue, Murder Rooms and the unfairly maligned Gormenghast in there.
Posted by SharonM at 08:50 No comments:

First of all, I'd like to extend hearty congratulations to Nicholas Hytner and Patrick Stewart, Knighted in the New Year's Honours List.

Both were contributors to We Could Possibly Comment - Ian Richardson Remembered .

Nicholas Hytner was one of the first people to agree to provide input, having worked with Ian in his National Theatre debut in The Alchemist, which was sadly his last stage role. Nicholas has worked wonders at the National Theatre and his latest innovation, broadcasting selected productions live around the world, has been such a blessing to so many people who would otherwise not get the chance to see these shows.

I interviewed Patrick Stewart in September 2007, in his dressing room at the Gielgud Theatre, where he was starring in Macbeth. He was extremely courteous and focused and provided a highly insightful tribute to Ian.

2010 already - it's frightening how quickly the decade has flown past.

I spent a good bit of New Year's Eve, having declined invitations to go out, watching the series Strange, in which Ian played a rather sinister Canon. I'd obtained the DVD a couple of months ago and as it wasn't a commercial recording hadn't got round to checking it yet.

Strange, penned by Andrew Marshall, was about a defrocked priest, John Strange - played by Richard Coyle - and his battle against various demons, aided by a nurse, played by Samantha Janus, and side-kicks played Andrew Lee Potts and Timmy Lang. Ian's Canon Black was there attempting to thwart his former charge at every turn, whilst giving dog's abuse to his young assistant, Doddington - played by Samuel Barnett. Ian had some wonderful lines in the series, invariably of the caustic kind.

Here's a very clever YouTube piece, which combined one of the best Rolling Stones tracks ever with visual clips of Canon Black very effectively.