Kindle version free for next 48 hours 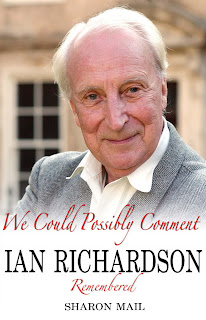 The revised Kindle Version of the book is available for free from Amazon Kindle worldwide, on Sunday 9 June and Monday 10 June.
http://www.amazon.co.uk/s/ref=nb_sb_noss_1?url=search-alias%3Ddigital-text&field-keywords=we+could+possibly+comment

With the broadcasting of the US Version of House of Cards, there has been a great deal of both revived and new interest in the original, BBC version of the series. The BBC DVD remastered version has been re-released both in the UK and the States http://www.amazon.co.uk/House-Cards-DVD-Ian-Richardson/dp/B00BM8STW0/ref=sr_1_4?s=dvd&ie=UTF8&qid=1370766019&sr=1-4&keywords=house+of+cards and the previous version, released in 2004, is currently in the Amazon charts and garnering lots of new, great reviews.

I thought that now would be the appropriate time to give people the chance to read the book. For those with the original paperback copy, there is some additional material, including a couple of memories from Ian's son Miles.
Posted by SharonM at 01:27