Will a New Ghost Walk at Stratford? 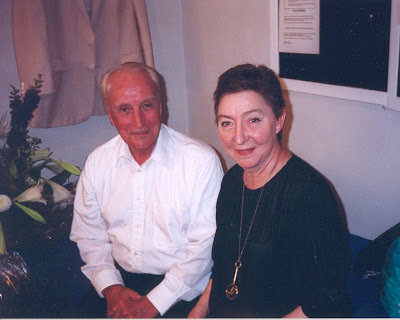 WHEN the new Shakespeare Memorial Theatre opens its doors in Stratford-upon-Avon this week after its multi-million pound refurbishment, it will contain one very special but unseen addition.

Buried in the foundations, under the front row of the stalls, are the ashes of Ian Richardson who between 1960 and 1975 was one of the outstanding members of the Royal Shakespeare Company.

Ian died on February 9, 2007, but his ashes weren’t given their final resting place, by his widow Maroussia and younger son Miles, until November 2008.

Maroussia explained: “For 15 years, Ian played a succession of leading roles with the Royal Shakespeare Company, from Ford to Coriolanus, Prospero to Pericles, with many others in between. His blood, sweat and tears were decidedly absorbed into the fabric of the old theatre.

“After he died, his ashes sat in an urn in my kitchen for nearly two years while I pondered over a suitable place to put them. One of my sons Miles, being in the RSC, I went to Stratford and we did the tourists tour of the foundations for the new theatre. Looking around at the still unconcreted ground, the idea came to me - this was the perfect place. Permissions were sought and given and we placed the ashes just under what will be the middle of row A in the stalls.”

Edinburgh-born Richardson graduated from Glasgow’s College of Dramatic Art (now the Royal Scottish Academy of Music and Drama) in 1958, winning the James Bridie Gold Medal. Having been spotted by Bernard Hepton, he went from there straight to the Birmingham Rep, where he took over from Albert Finney as the juvenile lead. While at the Rep and only 24, he played Hamlet to much acclaim.

18 months after arriving in Birmingham, directors John Barton and Peter Hall became aware of the talented young actor and Ian was invited to join Hall’s fledgling permanent Company at Stratford.

Ian rose steadily through the cast, becoming a real star of the Company and was often described as the Gielgud of his generation. He was an absolute master of the verse, of whom Plays and Players critic Gary O’Connor commented, ‘Some are born with silver spoons in their mouths, Mr Richardson was born with the iambic pentameter. He warbles, he flutes, he moans, he juggles, he transposes, stands on his head, lies on his back: whatever he may be doing, the lines ring out with clarity and precision.’

The comment was prompted by his performance as Berowne in the 1973 production of Love’s Labour’s Lost, a role that was highly challenging, but turned out to be his favourite.

He was best known for his virtuosic instrument of a voice, but was the complete actor on stage - bold and inventive and with a superb sense of comic timing. He was also very skilled at talking to and involving the audiences and had an electrifying stage presence.

He starred in the iconic production of Richard II in which he and Richard Pasco interchanged the roles of Richard and Bolingbroke. For a while, when he played Bolingbroke he used to hurl himself from steps onto Richard’s coffin below, making everyone gasp. His performance as Frank Ford in The Merry Wives of Windsor, a role he reprised several times, is said to have been the definitive one, never bettered in terms of comedic ability.

Ian also enjoyed the ‘honour’ of being the first actor to appear naked on stage on Broadway, in 1965 – though he wore a posing pouch and made sure he only presented a rear view to audiences. That was in the RSC’s award-winning production of Marat/Sade, directed by Peter Brook. In the original production, Ian played the Herald, but when the play went to the States Ian, who was also assistant director, was asked to take over from Clive Revill as Marat.

Ian, being such a physical actor, hated having to spend night after night confined to a bath tub. He was also very conscious of the fact that every time he stepped out of the bath there were was a clicking noise. Eventually he discovered that it was the sound of opera glasses clunking against spectacles as members of the audience strained to see his bare bottom.

He was a generous mentor to the younger actors, highly respected and much loved by cast and crew alike. Few people will forget Helen Mirren’s BAFTA acceptance speech as Best Actress in a Film on Sunday, February 11, just two days after his death. Fighting back the tears, she told of how generous and supportive he had been when she was at the RSC and how she wasn’t sure she would have become the actress she was without his help.

Ian was highly popular with audiences too, and fans often used to walk past his house, some even hiding in the bushes near his home.

For all that he appeared calm and fully in command on stage, Ian struggled with his nerves for most of his years at Stratford. At his Memorial Service in St Paul’s Church, Covent Garden in May, 2007, Sir Peter Hall recalled that he used to suffer greatly for his art, very often being physically sick before going on stage.

It was at Stratford, during a rehearsal for The Merchant of Venice, that Ian met fellow Company member Maroussia Frank, who was to be his wife, twin soul and constant companion for 46 years. He was very particular about his appearance and she was going through a scruffy, beatnik phase and it certainly wasn’t a case of love at first sight. But, they soon fell in love and were married on February 2, 1961.

Their first child Jeremy was born in December that year and Miles in 1963. Both boys appeared as fairies in Peter Hall’s 1968 film A Midsummer Night’s Dream, in which Judi Dench played Titania to Ian’s Oberon. Jeremy played Mamillius in Trevor Nunn’s 1969 production of A Winter’s Tale at Stratford. Miles, who was in a number of TV dramas in which his father starred, has been a member of the RSC including being involved in the recent run of the History Plays.

After his RSC days Ian concentrated mainly on television and film and had an equally successful career in dramas such as Tinker Tailor Soldier Spy, Private Schulz, Porterhouse Blue, Gormenghast, Murder Rooms and Bleak House. He was best known for his portrayal of the duplicitous politician Francis Urquhart in the House of Cards series. It was a role that won him several awards including a BAFTA, and an army of admirers.

The last role he played at Stratford, was Richard III and it was Richard whom scriptwriter Andrew Davies used as the model for Urquhart. The famous asides to camera, delivered by Ian with consummate ease and huge effect, were very much part of that, as were the Shakespearian quotes ‘FU’ used throughout the series.

Ian went back to Stratford in July, 2002 for a week’s run of John Barton’s recital programme The Hollow Crown, with Sir Derek Jacobi, Sir Donald Sinden and Janet Suzman. Suzman had replaced Dame Diana Rigg who had been on the Crown tour of Australia and NewZealand a couple of months earlier. Ian took part in a further Antipodean tour the following year and then a five-week run in Toronto, this time with Sinden, Vanessa Redgrave and Alan Howard.

Many people assumed that Ian was a theatrical knight, but although he became a Commander of the British Empire in 1989, the higher accolade was never conferred upon him.

He last performed in Stratford on June 29, 2003 in a poetry recital, the Echoing Green, with Judi Dench. Her late husband Michael Williams had once lodged with the Richardsons and Ian and Alec McCowen were ushers at their wedding.

Ian’s sudden death came as a real shock. He died in his sleep, aged 72, following a heart attack. He hadn’t been ill and had spent the day having costume and wig fittings for a forthcoming episode of Midsomer Murders he was about to start filming.

As well as being an outstanding actor, Ian was a thoroughly dedicated professional, who couldn’t abide sloppiness, bad manners or lack of consideration to fellow performers or crew. He didn’t suffer fools gladly and would make his displeasure known when faced with lack of courtesy or effort in others.

Ian had a great love of Shakespeare and was disdainful of any perceived falling standards in verse-speaking or performance.

If the dizzy heights of the Company from these glorious years at Stratford aren’t reached when Royal Shakespeare Theatre productions get underway again next February, it’s possible that Richardsonian rumblings might be heard from below ground.