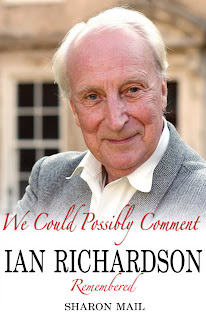 Here is an abridged version of the first review of the book in a publication.
Reproduced by kind permission of the Herald-Banner, Greenville, Texas :-

"Friends could possibly comment — and do — on beloved British actor"

In this country we knew him through television’s “Masterpiece Theatre” and from the Grey Poupon mustard commercials.
In Britain he is well remembered for his roles with the Royal Shakespeare Company.
His friends and co-workers cherish the memory of a kind and thoughtful man.
He is the late Ian Richardson, the subject of a wonderfully edited new book, “We Could Possibly Comment — Ian Richardson Remembered,” by Sharon Mail, author, freelance writer and fellow Scot.
The book’s title comes from PBS’s witty political satire “House of Cards” (Masterpiece Theatre) in which Richardson starred as Francis Urquhart, a conniving, ruthless Member of Parliament who eventually becomes prime minister. Repeatedly throughout the series he looked at another character and slyly said, “You might well think that; I couldn’t possibly comment.”
His remark became so well known during the run of the show that former Prime Ministers John Major and Tony Blair are said to have jokingly repeated it to others.
Sharon Mail, who had known Richardson and his wife for some years before the actor’s unexpected death in February 2007, realized there were many people who could indeed comment on his life and career. Rather than write the traditional biography — he was born here, studied there, starred in such-and-such — Mail chose to contact more than 50 actors, directors, producers and friends and collect their reminiscences of this remarkable man.
The resulting book is a multi-faceted view of one of the finest actors of our time.
American filmgoers and TV fans will find familiar names among those who contributed to the book: Academy Award winners Judi Dench and Helen Mirren; Stacy Keach, David Suchet, Ian McKellen, Charles Dance, Joanne Woodward, and Brian Blessed. Also included are Richardson’s own comments on Paul Newman and on Johnny Depp who appeared with him in “From Hell” (2001).
• Judi Dench provided a humorous story dating back to the early 1960s when Richardson and Dench’s late husband, Michael Williams, were appearing in a production of Shakespeare’s “A Midsummer Night’s Dream” in London. “Part of the set was a huge tree in the middle of the stage and Ian and Michael set up a small bar inside it,” Dench writes. “There are large chunks of the play when Oberon (Ian) and Puck (Michael) do not appear, and it is these times that they spent in the ‘tree’ in the ‘bar.’”
• Paul Seed, director of “House of Cards,” recalled, “He was also huge fun to work with. We laughed an awful lot — often too much.”
• Actress Juliet Stevenson assessed his impact on the profession: “Ian was a really brilliant actor in a kind of mould that I’m not sure is going to go on existing.”
• Stacy Keach recalled working with Richardson in the TV production of “Mistral’s Daughter”: “I had to pinch myself a couple of times. I could hardly believe that I was actually working with one of my acting heroes.”
Co-workers and fans remember Richardson’s distinctive voice, which no viewer who watched him in “House of Cards” could ever mistake:
• Helen Mirren: “He had the most extraordinary voice — bell-like and with the most incredible internal power.”
• Ian McKellen: “He was most famous for his voice, which could mellifluously flute or bellow — an instrument that any Lear would envy.”
Mail’s book also illustrates his warmth and generosity in mentoring young actors at the beginning of their careers.
• Helen Mirren: “Ian was the most generous of men. I remember early on, I played a scene with him and he maneuvered it so that I would get all the laughs I could get. And if I wasn’t getting them he would teach me. Also, he would wait and make sure that I got my exit round of applause — something not all actors would do.”
• Christine Andreas who played Eliza Doolittle to Richardson’s Henry Higgins in the 20th anniversary Broadway revival of “My Fair Lady”: “From the first moment of meeting, he was generous and the most gentlemanly man I had ever met...I had a year of gallantry with Ian Richardson that I will never forget.”
We in the stage and screen audience had too few unforgettable years watching Richardson in his prime.
“His ashes were placed into the foundations of what will be the front row of the stalls of the rebuilt Royal Shakespeare Theatre in Stratford-upon Avon, which is due to reopen in 2010,” wrote the author, in conclusion. “I can’t think of a more touching or suitable resting place.”
Nor can I think of a more touching or suitable tribute to a great gentleman than this book.

“We Could Possibly Comment, Ian Richardson Remembered,” a picture-packed book by Sharon Mail, is available at this Web site: http://www.troubador.co.uk/book_info.asp?bookid=894 which pulls up the book and has a “click to add to basket” icon at the bottom.

Carol Ferguson is a feature writer for the Herald-Banner.
Posted by SharonM at 14:50