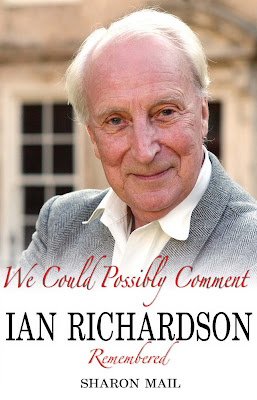 What the reviewers say:

"... a charming book" - S E G Hopkin, Remembering a Classicist Spectator Magazine
"a multi-faceted view of one of the finest actors of our time... nor can I think of a more touching or suitable tribute to a great gentleman than this book" - scroll down for full review Carol Ferguson, Banner Herald, Greenville Texas
"'John Sessions called this book 'a glorious and heart-warming tribute to a superb and much loved actor' I can certainly echo his praise. Highly Recommended." scroll down for full review - Scene One Magazine
And from Elaine Simpson-Long on her Blogsite Random Jottings of a Book and Opera Lover

13 November 2009
Ian Richardson Remembered - Sharon Mail
Readers of Random may remember that I wrote some time ago about how, for many years, I had lost my interest in the theatre and, in particular, Shakespeare. I am pretty sure you will have forgotten, why you should remember passeth all understanding, but the two posts are here and here.

Any my reason for mentioning them in this review? Because it reminds me of just how much I missed in those wilderness years. My ex-husband always loved the theatre and Shakespeare and used to attend the Chichester Festival and go to Stratford and he saw some simply marvellous productions and was present at wonderful performances by individual actors. I missed them all and when I read this memoire of Ian Richardson, who died two years ago, I began to feel aggrieved all over again that I did not see this superb actor on stage. It is clear from the memories of his fellow actors and those producers he worked with, that he was 'a consummate actor' this phrase popping up over and over again, with a magnificent speaking voice which could mesmerise the listener.

I only know Ian Richardson from television, but my two main memories are of him in Tinker, Tailor, Soldier, Spy and House of Cards and I suppose if those two are to be my personal remembrance, then I could hardly pick better.

When I first watched Tinker, Tailor it was shown on a Monday night and every Sunday they repeated the previous week's episode so that viewers could catch up and remind themselves of the intricacies of the plot (no i-player around in those days) and boy did we need it. The intrigues and labyrinthine double dealings and counter plots meant that you really had to be alert and I remember one night sitting down and taking the episode step by step to fully understand what was happening. Ian played Bill Haydon, a member of MI5 and he was smooth and elegant and charm personified. George Smiley, superbly played by Alec Guinness, had to find out who the mole was at the 'Circus' and as we watched each character being investigated and uncovered, it was impossible to guess who was the traitor. The standard of acting in this series was extraordinarily high, how could it fail to be with such a cast, and it is available on DVD - I have it and last year I watched it again and though it is now some 30 years old it is still as superb as ever. There is one pivotal scene between Guinness and Richardson which I have watched over and over again so lost in admiration am I at the interplay between these two magnificent British thespians. I am being very careful not to give away the plot here, as I so want those of you who have never seen this series to get hold of it and watch.

And so we come to The House of Cards. The opening shot of the first episode had Ian Richardson, playing an MP, Frances Urquhart, sitting at his desk. The camera is behind him looking over his shoulder and he holds at a photograph of Mrs Thatcher. He puts the photo into a desk drawer, turns his face to the camera and us and says "Nothing lasts forever. Even the longest, the most glittering reign must come to an end one day". Then he smiles coldly.

Now that was a simply stunning opening, but then the most amazing stroke of luck for the producers of this series, at least from their point of view, not sure that Mrs Thatcher who resigned just a few weeks after the show started, would agree, but this seismic political event was a case of fiction becoming reality and it just caught the imagination. Ian's character, Frances Urquhart and his wife (the two Macbeths) coldly and clinically planned his ascent to the office of Prime Minister, ruthlessly dispatching anyone who got in their way. It was television of the highest order and just so exciting that it had you on the edge of your seat. Susannah Harker played a young, susceptible journalist who becomes sexually involved with Urquhart and who he chose to disseminate carefully placed information. HIs response to any question 'You might say that Mattie, I could not possible comment' became the catchphrase of the year and, in fact, has now passed into general usage and was part of our family's collection of in house jokes and day to day comment for years. It comes as no surprise to me when reading this section, that I discovered this line was actually put in the script by Andrew Davies - yes the ever present and ubiquitous scriptwriter and producer of Pride and Prejudice amongst many others.

Though these two examples may be my poor attempt at an appreciation of this wonderful actor, at least they are two that show him at the top of his form and his capabilities. I just have to regret that I never saw him as Richard II or the Government Inspector or Ford in the Merry Wives of WIndsor and other roles that are too long for me to list here and be happy that I saw him as Haydon and Urquhart.

When reading a biography, though this is in no way a full life, the character of the subject has a habit of slipping through between the lines. An author can only say so much about the person they are writing about, but quotes and sayings and comments actually spoken by their subject, give the real person away. Ian Richardson married his beloved wife Maroussia in 1961 and was devoted to her to the day he died.

They were inseparable and when he saw her after an absence of a few hours, he greeted her as if she had been away for months. She loved him, took care of him and he relied upon her totally. He adored her and because of this security and love he was able to give of his best on the stage, he was thoughtful and helpful to young actors, took direction with grace and charm and, though he could cuss and swear and lose his temper with the best of them, he was lovable and much loved.

In fact, my main impression is that he was a warm hearted and kind man. To me, kindness is the greatest of the virtues and I can think of no higher compliment than to say this about this wonderful actor.

I thank Sharon for sending me a copy of her book - I am most grateful to her.